Travelers' Trifles or What I See From Mountain To Sea by M.A.C.

The good traveler has no fixed plans and is not intent on arriving. 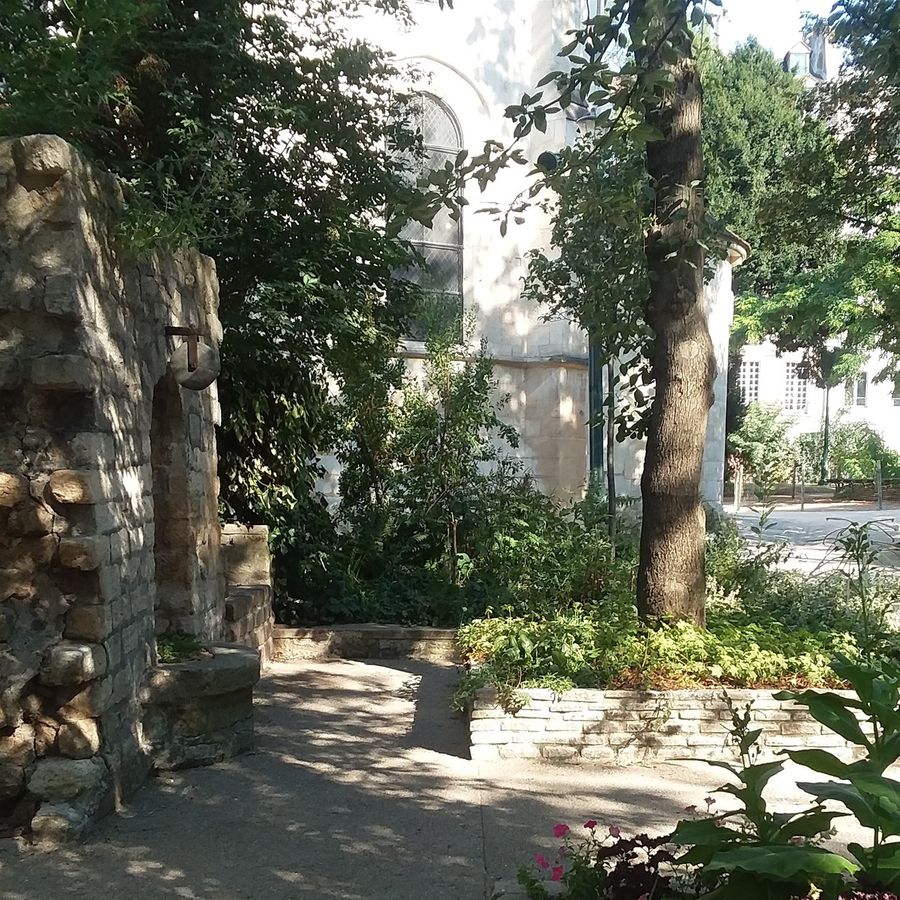 Square René Viviane is at Quai de Montebello, Rue Lagnange, and Rue de Saint-Julien le Pauvre. The bookstore Shakespeare and Company is on the other side of Rue Saint-Julien le Pauvre towards the west. This is a small, cozy park which is one of my favorite parks in Paris. There are lots of places to sit and relax in the shade of several trees. On the left side of this photo is an ancient Wall from a previous building that could have been part of the oldest hospital in Paris. On the other side of the Seine River was the ancient Hospital Dieu and an annex of that hospital was here. Or, possibly a portion of a mausoleum wall because there was also a cemetery here for a time. The oldest tree in Paris is here. It is a Locust tree. It was planted by Jean Robin (a botanist 1550-1620). 1601 is the year given when he planted the tree. There is also a strange fountain here. To look at it, one may think "What the heck is that?" It actually depicts a medieval legend about Saint-Julien the hospitalier. I do not know the story so I will google it and then I'll post the photo that I took of the fountain. 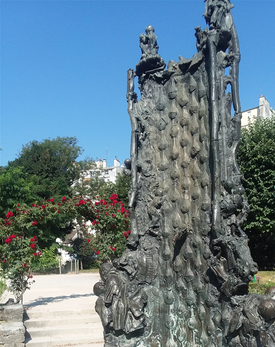 And here is that odd fountain that I mentioned. Saint Julien le Hospitalier lived around 350 CE. According to the legend. His family was a very wealthy, noble family. The father of Julien saw a coven of witches place a curse on his baby when he was born. After Julien was grown he often went hunting and one time while out, he had a vision that he would kill his parents but he dismissed it as nonsense. One time, after he was married, his parents visited his home and his wife brought them to their bedroom where they could sleep. While Julien was out hunting, a witch came to him and told him that his wife was with a man in their bedroom. Julien rushed back to the house and out of jealous anger, he immediately rushed into the bed room and killed his parents while they were sleeping. After this, on mourning and penitent attitude he vowed to live a life of good deeds and. He established several hospitals and homes for impoverished families. That is the legend this fountain depicts. 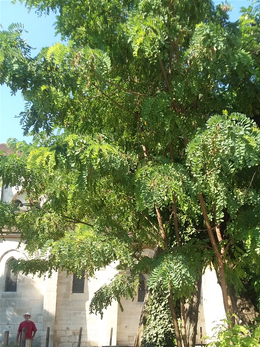 And also in Square René Viviane is the oldest tree in Paris that I mentioned above. It is a Robinia Pseudoacacia tree. Its genus name comes from Jean Robin who planted it. Its species name comes from the fact that these trees are very similar to Acacia trees. Jean Robin was a botanist, a doctor, and the official gardener at the royal estate. He was commissioned to create the Jardine des Plantes which is a botanical garden. The second oldest tree in Paris is also a Locust tree and it was planted by Jean Robins' son in Jardine des Plantes. The oldest tree is 50 feet tall and must be supported by a cement beam and metal beam. Care takers assure the public that the tree is healthy and will live many more years.

"I haven't been everywhere but it is on my list." 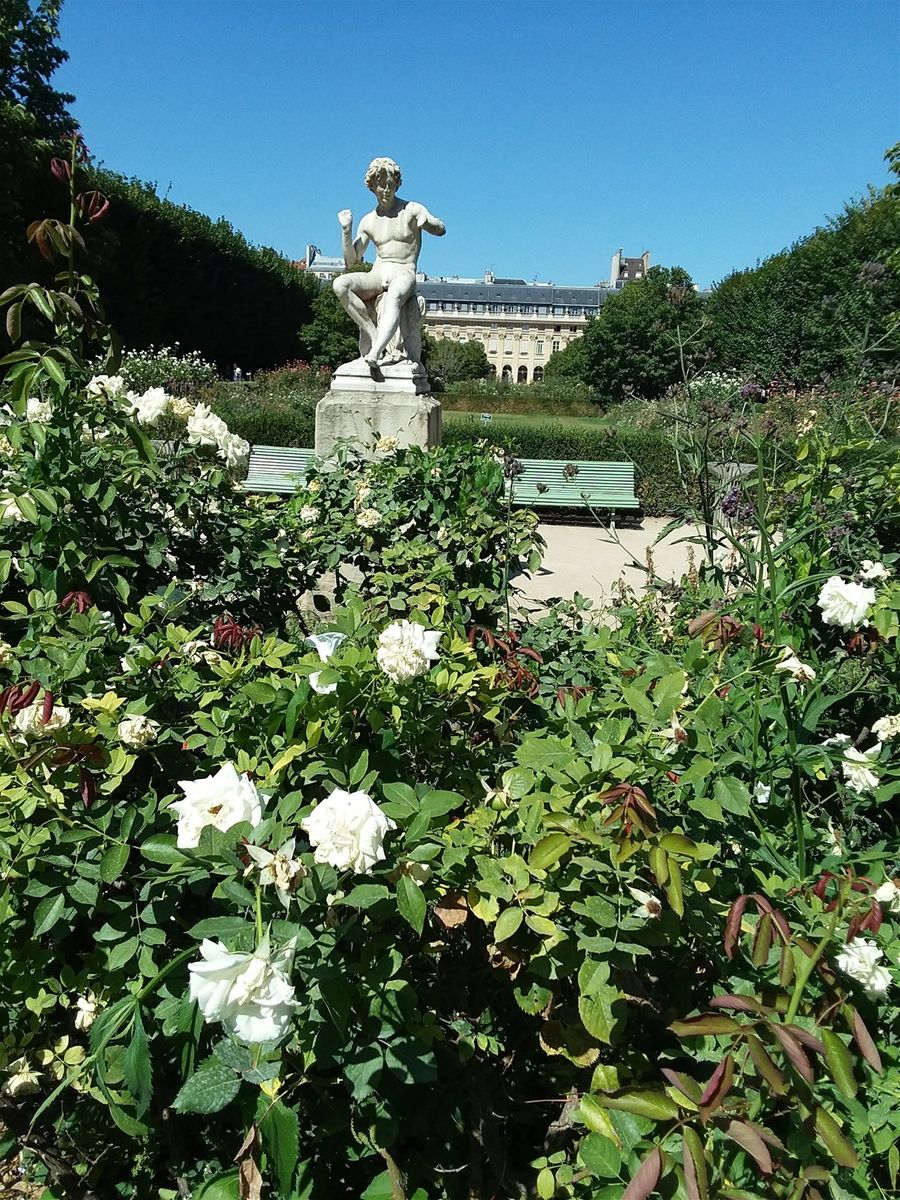 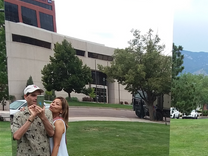 There is a park. In Colorado Springs. A rather large park. Then there was us. And there was a mirror. To our left was a mirror. To our right was no mirror...I do not think this park has a name. I think it is part of the Pikes Peak Performance Center grounds. We just found this park as we went out to explore the area around the Antlers Hotel where we were staying. 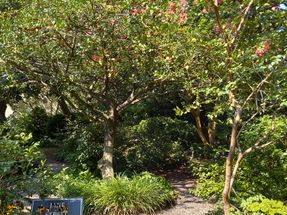 This is a very small park but it is really beautiful and cozy. It is on Jane Street just a few streets from the Jane Hotel in Greenwich Village. It is at 8th Avenue and Jane Street. The plaque in the park has the name, Jane Street Garden. There are at least 3 benches in the park though so I think it IS just large enough to be called a park.. 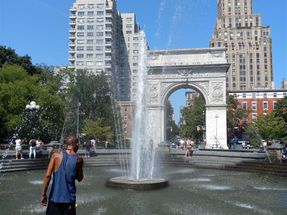 The opposite in size and atmosphere to Jane Street Garden is this park. This is Washington Square Park. It is also located in Greenwich Village but it is at the south end of 5th avenue. University students relax and study here quite often. Although you can not see it in this photo there are grassy areas and benches all around the park. There is also a statue of Giuseppi Garibaldi, the Italian nationalist hero here. It is in the area of the park called Garibaldi Plaza. On the other side of the arch are statues of George Washington, one with him as commander in chief and the other as president. Bohemian type people also like to relax here, sometimes entertaining people with music, juggling, or with other talents.